This was Jack’s second Halloween, and it was the first year I attempted to do anything in the realm of crafty for his costume. Let’s just pause so I can mention that in Jack’s life, 50 percent of time I get craftsy with his costume–good record, right! We will see how long it lasts.

You may be wondering what part of Jack’s costume involves any type of craftiness. I’ll give you all a moment… Not sure. Give up? It’s his shirt! Red-and-black striped shirts are hard to find, apparently. I painted on those black stripes, and I feel much more accomplished than I should. See, I’ve never been known for my craftiness, so most completed projects are a success in my book. The only thing missing? Hobbes (Jack was Clavin, if this has been unclear). We ordered Hobbes on Etsy over a week ago. The problem?  This is not Amazon prime, and we unknowingly ordered him from Moldova in Eastern Europe. He arrived today and is pretty great, but to complete Jack’s costume for Halloween, we had to settle for a miniature tiger from the bottom of Jack’s toy bin.

Brandon told me to dress up so it wouldn’t look like we were taking a kid with no costume trick-or-treating; I admit, it is hard to tell what Jack is without a proper Hobbes. Anyway, I don’t know how Brandon got away with no costume, but I pulled together one of my favorites: 80s girl. It’s the easiest costume I know.

The best part of the night was stopping by Marxie and Dara’s house to say hi. We happened to show up at the same time as Brandon’s cousin Gavin, his wife Lori, and their two daughters. Halloween is so fun when you are a kid at your great-grandparents!

We headed home and got to take Jack trick-or-treating in our neighborhood. I love that we live in a place with a small-town feel that is big-city accessible. And our little town did not disappoint for Halloween. Trick-or-treating felt movie-esque. Jack didn’t know what was happening, but he did learn to take the candy and drop it in the bag we brought–Brandon and I have been enjoying the fruits of his labor (still are today). We did offer him a lollipop on Halloween.  He loved it. Who knew? SUGAR.

After trick-or-treating we went out for pizza and beer in our neighborhood. Did I mention I love the walkability of this place? Jack was content with his lollipop as our successful Halloween night came to a close. 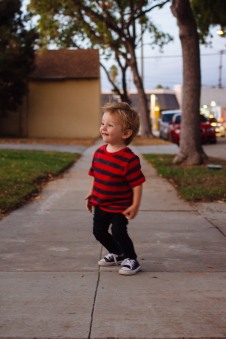 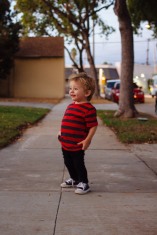 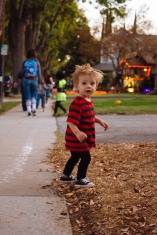